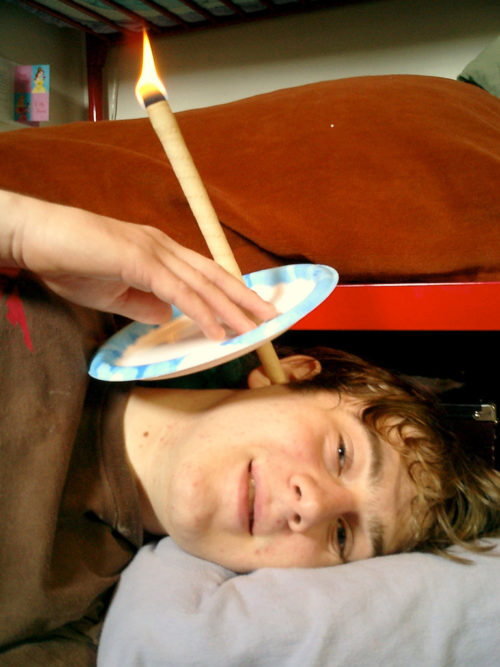 The ear candling treatment is also candling or ear coning. It is a therapy many people use for the purpose of ear health. Though doctors and scientific community are divided in giving certification for ear candling, the age old therapy is used as a home remedy by many people across the world to relieve pain and discomfort in the ear.

The Hopi, the ancient Pueblo people, who is said to have possessed great medicinal knowledge, brought this knowledge to Europe. Many of texts in Asia ,native North and South American Indians ,Siberian prairies, mention ear candles in their myths. Some even vouch that it is also mentioned in the ancient rock paintings with ear candles being used at initiation rituals and other medicinal purposes.

What is the purpose of ear candling?

All human has earwax, which is scientifically called cerumen. The build up of wax should be removed when it is full or when you have release from your ear. It is also removed when one has difficulty in hearing. Many methods are available to remove the ear wax and one of such ways is but ear candling. This is advocated by practitioners of alternative medicine.

How does it work?

It is practiced by lighting one end of a hollow candle and placing the other end in the ear canal. The pressure created inside the ear candle along with the vibration of air column, serve to softly press the ear drum which in turn produces secretion in the frontal and paranasal sinuses. This is thought to regulate ear pressure. This gives a soothing sensation. Many companies have been reaching the use of ear candles and have come up with their product.

What are the benefits?

The advocates of ear candling say there are many therapeutic uses for ear candling. They claim that the ear candles are successful in the treatment of throat and nose infections, sinusitis and even headaches. In many Spas across the globe, ear candling is practiced as it gives relaxation from stress and anxiety related symptoms.

Apart from Spa and practitioners of alternative medicine there are many companies that manufacture ear candles. But when it comes to buying from manufacturers always be sure to check quality of the product and that there are proper customer care.

It is advised that you do not perform ear candling alone. Always have someone to assist you when undertake ear candling. The assistance is suggested as it is found to be hard to carry out ear candling by yourself. This can also help minimize or avoid the risk of burning yourself or causing other trauma to your ear.

Though alternative medical specialists advocate ear candling and claim many benefits, modern medical professionals believe that candling is both ineffective and dangerous. Those practicing it should be aware about the risks and other concerns about ear candling so that one can always make an informed decision. The main arguments put forth against ear candling or ear coning by ENT specialists are that it can cause burns, blockages in the ear canal or can lead to ear infections. The doctor community and practitioners of alternative medicines differ in their stand regarding ear candling.