Home  >  blogs  >   Things you should know about airline cabin crew 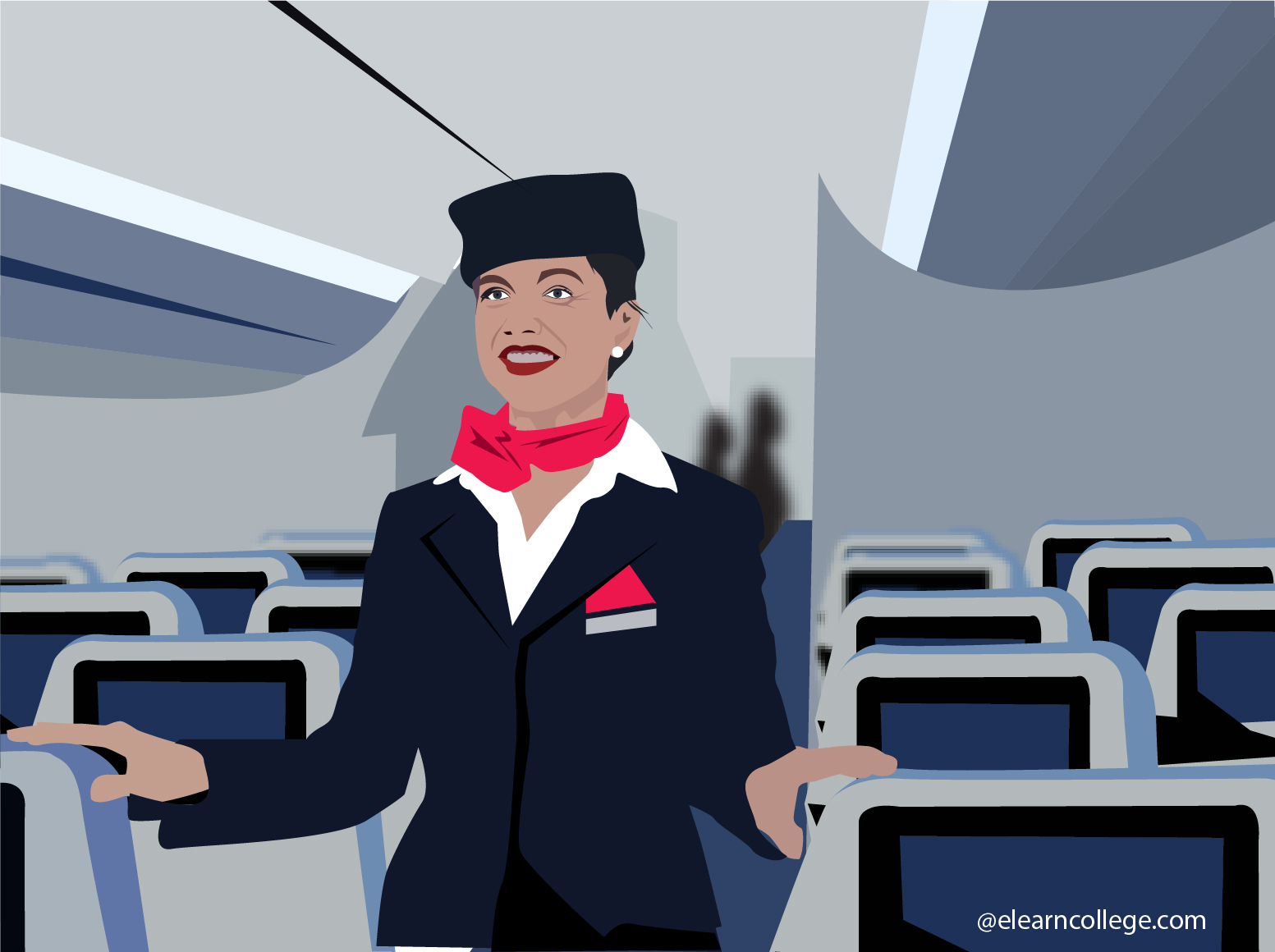 Things you should know about airline cabin crew

Female cabin attendants quickly replaced male cabin attendants, and by 1936, they had almost completely taken over the job. Ruth Carol Taylor was the first African-American airline cabin crew. They hired her in December 1957. She served as an attendant of an aeroplane on a Mohawk Airlines aeroplane. Her first flight was from Ithaca to New York on February 11, 1958. It was the first time an African American had held such a job.

Cabin attendants must participate in a session about safety with the rest of the crew and a lead airline cabin crew before each flight. During this meeting, they go through safety and rescue checklists, the positions and the numbers of pieces of equipment for emergencies, and other features unique to every plane. During each flight, the cabin crew perform a safety inspection to ensure that all supplies, like torches, life vests, and fire fighting equipment, are placed in the plane.

Before taking off, anything that isn't working or missing should be identified and fixed. They help pack carry-on luggage as well as inspect it for weight, height, as well as for dangerous items. The cabin crew check to see if people sitting near the emergency exit are ready and can help with an evacuation. They could either perform a safety lesson or keep an eye on passengers when watching a safety film. Before taking off, they should "protect the cockpit," ensure that the passengers fold the tables and put on their seat belts. In addition, they must ensure that the chairs are straight and the armrests are down. Pre-take-off service refers to all services provided between boarding and take-off.

Responsibilities in the air

Chief Purser is the most senior airline cabin crew in the chain of command of cabin attendants. They are not always the senior-most crew member on an aeroplane. A cabin crew member should have at least a few years of experience as an attendant of an aeroplane to get an appointment as a Chief Purser. This role requires additional training, and Chief Pursers usually receive a better salary than cabin attendants due to their increased responsibilities in administrative positions.

The responsibility of the purser includes the actions of cabin attendants of the whole plane or a compartment of a large plane. Pursers help the Chief Purser with handling the cabin on a large aircraft. They are cabin attendants or employees of a similar field who have worked for an airline company for many years before applying for and receiving further qualifications to become pursers. Pursers usually receive higher pay than cabin attendants due to the extra responsibilities and supervisory positions.

Cabin attendants study in an airline's headquarters city for a duration ranging from 4 months to 6 months; it is subject to the country and the airline. Health is the primary focus of instruction, and cabin attendants, are tested for every aircraft. Among the areas included in safety training are emergency traveller rescue, in-aeroplane, defibrillation, CPR, first aid and fire fighting.

For safety concerns, almost all airline companies have height standards to ensure that every airline cabin crew can access overhead safety devices. The typical height range for the profession is from 1.5m to 1.85 m. 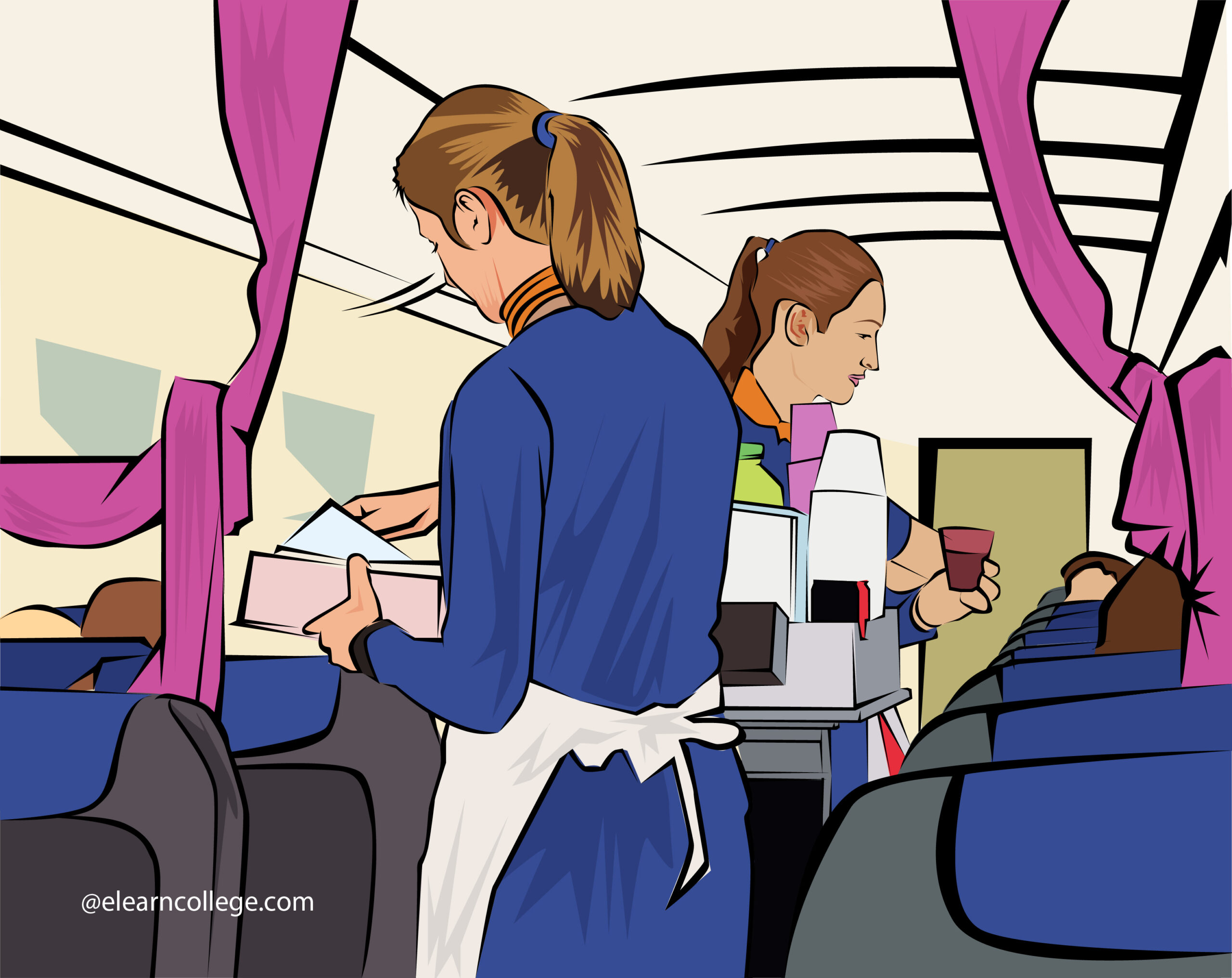 Uniforms as well as presentation

According to the general public, in-cabin attendants have higher rates of melanoma, uterine, breast cancer, prostate, stomach, and thyroid cancers, according to a report published in 2018. Many believe that their lifestyle and the long duration they spend on the air as reasons for these issues.

Cosmic ionising radiation is a kind of radiation that comes from outer space and becomes worse as the altitude increases. Cabin attendants, as well as crew members, are known to be vulnerable to it. According to the World Health Organization's International Agency for Research on Cancer, Ionizing radiation is a human carcinogen. Cabin attendants are often more subject to too much UV radiation daily than normal people, making them more susceptible to skin cancer.

Air quality in the cabin

Symptoms like headache, nausea, fever, and respiratory problems, among many other health issues, have been identified in-cabin attendants, especially on long routes. They are the subject of an ongoing review. There is a great deal of concern about infectious diseases, especially tuberculosis. It's unclear if these problems cause bad air quality in the cabin or other aeroplane-related conditions like reduced hypoxia, barometric pressure or low humidity.

Physical as well as verbal abuse are common among cabin attendants. According to studies conducted in the US and Australia, most cabin attendants are victims of sexual abuse during their employment. This includes sexual violence, unwelcome contact, and sexual remarks made by peers and passengers.

Sexual harassment in the verbal form is the remarks that are "nasty, unwelcome, obscene, crude, offensive, awkward, sexual, provocative, and gross," according to cabin attendants. As per studies, most attendants do not complain or resist sexual exploitation because it is not expected of them by the company and the general public.

Emotional labour is the practice of manipulating feelings and gestures to achieve the emotional needs of the job with a socially observable facial and bodily appearance inside the workplace. Professor Emerita of Sociology Arlie Hochschild first identified and related the career of cabin attendants in her work, The Managed Heart. According to her, cabin attendants make an emotional effort to elevate the customer's status and entice additional purchases with their pleasantness. They aid this endeavour by evoking emotions that make the "good" show seem normal. She observes that in the airline business, corporate logic creates a sequence of ties between rivalry, market growth, ads, and business asks for acting. And, when circumstances cause this reasoning to function, private emotional interaction makes room for corporate emotional exchange. She also discusses how cabin attendants receive training to manage passengers' emotions during turbulence and dangerous conditions by suppressing their terror and anxiety.

Many airlines started promoting the charm and pleasantness of their attendant in the 1960s as well as1970s. National Airlines started a new route, "Fly Me", which is a promotion that features sexy female cabin attendants with slogans like "I'm Lorraine." Please transport me to Orlando." (The ad campaign was from the 1973 film, Fly Me.) Braniff International Airline Company ran a campaign called "Air Strip," in which equally glamorous young female cabin attendants changed uniforms in the middle of an aeroplane.

Many airlines in the US had policies requiring single women to work as cabin attendants. In addition, 32 was the retirement age, based on the assumption that women would become less desirable and glamorous after it. According to the Title VII of the Civil Rights Act in 1964, the EEOC ruled age limits on airline cabin crew jobs to be unconstitutional sex discrimination in 1968. Roz Hanby, an aeroplane attendant, rose to prominence in the 1980s as the brand ambassador for British Airways "Fly the Flag" promotional campaign, which lasted seven years. Singapore Airlines Company is among the last companies that still use their female attendants in advertisements as "Singapore Girls". However, this gradually fades, favouring ads that emphasise the fleet's modernity.

Beginning in the 1940s with United Airlines, airline cabin crew unions formed. Soon they started to bargain for better wages, pensions, and working conditions. Later, such unions would protest what they saw as sexist norms and unequal labour conditions. This included age caps, height limits, abortion restrictions, and maternity prohibitions. Courts struck many of these restrictions. The Association of Cabin attendants is the main cabin attendants' union. The cabin attendants of American Airlines, the world's largest airline, are represented by the Association of Professional Cabin attendants.

Female cabin attendants had to be unmarried to be eligible for the job. They were also terminated if they married, gained weight, or reached the age of thirty-two or thirty-five. Attendants for women's rights opposed sexist advertisements and corporate sexism in the 70s and took several lawsuits to arbitration. President L. B. Johnson of the US signed the Civil Rights Act in 1964, prohibiting sex segregation and paving the way for establishing the EEOC in 1968.

The EEOC found gender was not an appropriate job prerequisite for cabin attendants. For attendants, this included having an official regulatory authority to refer violations to and successfully appeal the age limit and marriage bans. Under Title seven of the 1964's Civil Rights Act, the EEOC ruled age limits on airline cabin crew jobs to be unconstitutional sex discrimination in 1968. In the decisive case of Pan Am vs Diaz, the court struck down the ban on recruiting just women. In every airline in 1971. By the 1980s, marriage was not a problem anymore. Weight limits, the last definite separation, were eased in the 90s by lawsuits and agreements. Cabin attendants or cabin personnel have recently started to replace the term "flight attendants" in certain places because it recognises their status as crew members.

Cabin attendants have a reputation for dealing with emergencies. The NTSB and other aviation agencies consider cabin attendants necessary for safety. As a result, cabin crew are a part of Part 121 of aircraft operations.

Studies, including those conducted in the aftermath of the British Air tours Aeroplane 28M, also concluded that confident cabin attendants are critical for rapid plane evacuation. Therefore, one can undoubtedly say that their presence is integral to flights.